Brina’s Debut Album ‘Under One Sun’

Direct links for purchasing the album are on Brina’s website: brinasings.com

The album is available as a CD by Mail order from: www.brina.bandcamp.com - This also includes free digital download. And from www.cdbaby.com

(Purchases and downloads sold via www.brina.bandcamp.com ensures a better deal for the artist, further enabling Brina to create and record more music in the future)

Brina is the voice of World Roots Reggae Music from Jamaica, an artiste steeped in the sounds and rhythms of her Jamaican culture.  With the release of the incredible debut album “Under One Sun”, Brina is ready to share her music with the world.

Under One Sun features Jamaican legends Toots Hibbert (of Toots and the Maytals) guest vocals, and Sly Dunbar (of Sly and Robbie) on Drums.  The quality of the songs and music, combined with Brina’s talent and sincerity drew many great musicians, eager to be part of this album, which includes the singles “Listen” and “Real Reggae Music” that have been gaining airplay in Jamaica and globally along with the January 2012 single release “Lala Vizuri (Sleep My Little Baby)” sung in English and Swahili.

The seeds for Under One Sun were planted in 2007 when Brina met Kieran C Murray, a Scottish musician living in Jamaica and they began writing songs together.  It was now time for Brina to record her debut album, truly representing the talent and creativity that exists in Jamaica. Descended from The Maroons, Brina’s deep connection with drums and African music is as natural as her vocal expressions of freedom and justice.  Her desire is to fuse together elements of her rich cultural and musical heritage using Reggae, Nyabinghi and other musical styles from the African diaspora; singing of justice, equality, liberation, oneness and love.  Brina's songs bring a positive healing message to the world.

In 2009 recording and production of the album began in the small Tribal Global studio in Stony Hill in the mountains above Kingston. Live drums and bass were tracked at Bob Marley’s world famous Tuff Gong recording studio, drums with Sly Dunbar at Anchor Studios and Grafton Studio for the live horn sessions.  Memorable vocal sessions were recorded in Jamaica’s mystical Blue Mountains.  Some drum and guitar sessions were recorded in Columbia and California through the internet, lending a truly global dimension to the project.  Between hurricanes, tropical storms and loud street sound systems the rest of the album was tracked in the Tribal Global Studio.  Recording was completed in the summer of 2010, final mixing and mastering completed in 2011.

With Brina’s incredible and powerful voice and songs backed up by this stellar line up of musicians, Brina's iconic debut album will delight lovers of music and reggae worldwide. This album will take you on a musical journey, with the classic sounds of; Roots Rock Reggae, rocked up Nyabinghi, classic One Drop Riddims, acoustic Nyabinghi drumming and chanting with a rural Jamaican gospel style, Funky Pop Rock, Rocking Dub, African, Latin and Brazilian grooves.  Like many classic Jamaican albums embraced by fans of myriad musical genres, this album embraces all the diverse musical influences mentioned, while effortlessly staying firmly rooted in the Reggae tradition.

Brina believes that music is a universal language crossing all borders, a powerful force that will help bring about the dream - the oneness of humanity - to millions of people around the globe.   “Under One Sun” will place Roots Reggae Music with a spiritual message on the world map.  The release of this incredible album allows Brina to share her music with the world and should not be missed.

Brina is the voice of World Roots Reggae Music from Jamaica, an artiste steeped in the sounds and rhythms of her Jamaican culture sharing her music with the world.

Brina is a vibrant and captivating performer her lyrics and music are refreshing and uplifting. When Brina steps in front of an audience, she beckons them to feel enlightened and empowered.

Descended from The Maroons, Brina’s deep connection with drums and African music is as natural as her vocal expressions of freedom and justice.  Fusing together elements of her rich cultural and musical heritage using Reggae, Nyabinghi and other musical styles from the global African Diaspora, Brina brings a positive healing message to the world through her songs, singing of justice, equality, liberation, oneness and love.

Since releasing her first singles in 2010 Brina has been performing in Jamaica, Europe and Africa. Brina’s Festival performances have included major festivals such as Reggae Geel in Belgium, Rototom Sunsplash in Spain, and the Karibu Music festival in Tanzania.

In April 2012 Brina released her iconic debut album ‘Under One Sun’ with the aim of putting Roots Reggae Music with a spiritual message back on the world map.  ‘Under One Sun’ recorded and produced in Jamaica, features Jamaican legends Toots Hibbert and Sly Dunbar. This album takes you on a musical journey, with the classic sounds of; reggae, nyabinghi drumming and chanting, funky pop rock, dub, African, Latin and Brazilian grooves. Like many classic Jamaican albums embraced by fans of myriad musical genres, ‘Under One Sun’ embraces diverse musical influences, while effortlessly staying firmly rooted in the Reggae tradition. This incredible album delights lovers of music and Reggae worldwide.

With her songs receiving airplay all over the world, Brina continued to push boundaries by singing in Swahili - the video for ‘Skiza’ was released in July 2014, followed by the Swahili language EP ‘Reggae Sauti Za Kiswahili’ in September 2014. Airplay in Swahili speaking Africa led to Brina traveling to Tanzania to perform in 2014, and again at the 2015 Karibu Festival in Bagamoyo.

Digging back into her Jamaican reggae roots resulted in the February 2016 release of Brina’s single and video ‘Warrior’ presented and produced by Jamaican legends Sly & Robbie – a song calling on every individual with the warrior spirit within them to feel empowered.

On November 29th 2016 the first single ‘Warmongerers By Name’ by Brina from upcoming album project Jamaica Sings Robert Burns was released. On this song Brina demonstrates the power of Jamaica’s greatest export – Reggae Music - combined with the immortal words of Scotland’s national bard, Robert Burns. It is a reggae re-working of a Burns anti war song written in 1791. This project, produced by Scottish producer Kieran C Murray, will feature Brina and a host of Jamaican artistes, including Ken Boothe, singing Burns songs. In 1786 Robert Burns had booked his ticket to Jamaica. Had he gone to Jamaica, this album will give a taste of how Burns’ songs might have sounded uniting Scottish songs with Jamaican music in a historical cross cultural collaboration.

For more information fans and music lovers are encouraged to visit brinasings.com where you can discover Brina’s music, videos etc, and also sign up to Brina’s mailing list. 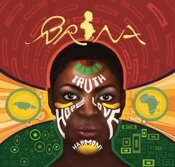